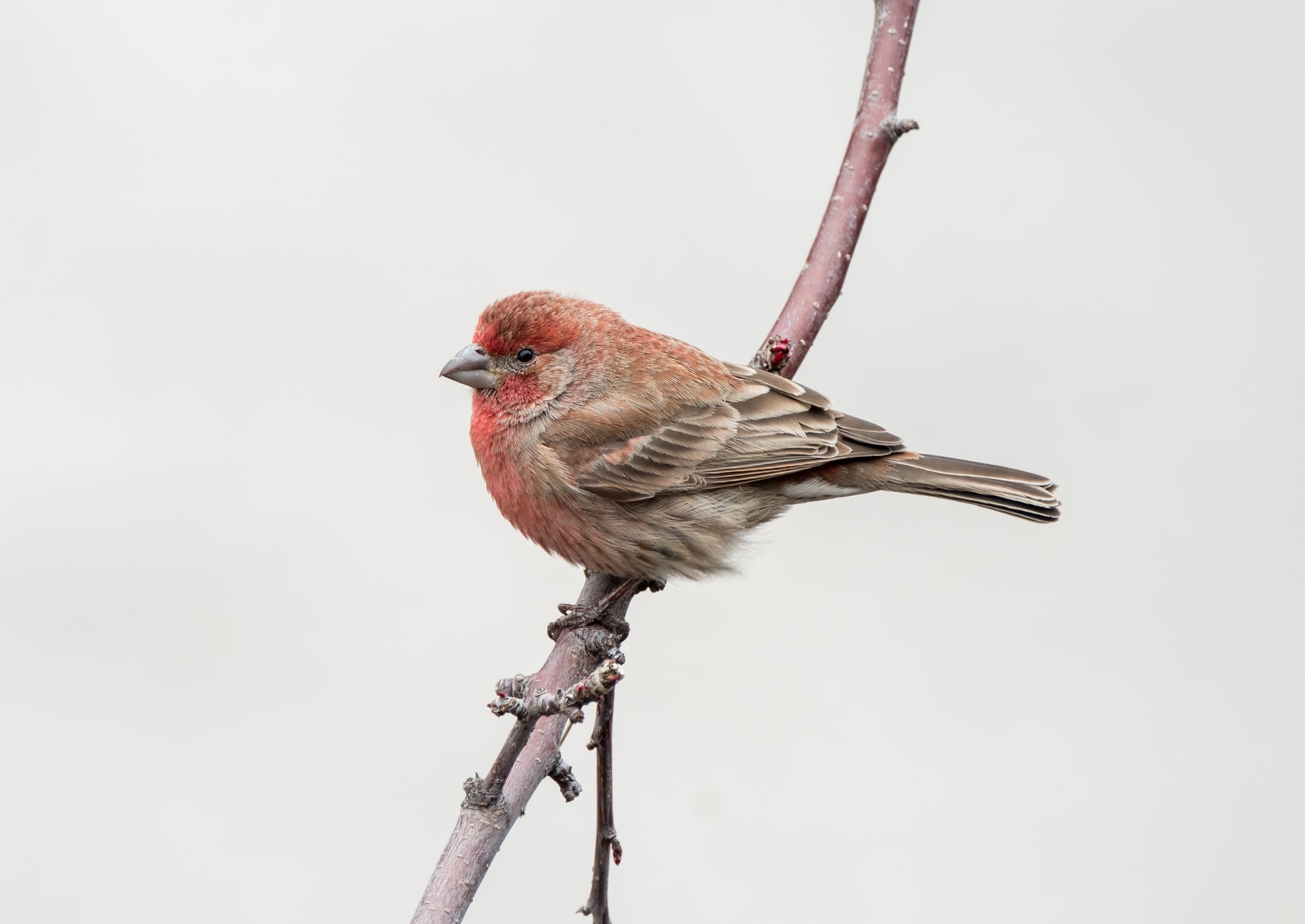 Red Finches (or House Finches) are a more recent species introduced from western North America to Eastern North America. Due to their cheerful red heads and beautiful twittering song, the Red Finch has received a warmer welcome than some other arrivals, like the House Sparrows and European Starlings.

You’ve probably heard their long songs throughout your neighborhood, and if you haven’t spotted one yet, the chances are that you’ll see one soon at the next bird feeder you walk past.

How to ID An Red Finch

There are four keys to identifying a Red Finch:

Red Finches have small bodies with long, flat heads and fairly large beaks for their size. Their wings are short, making their tails seem extra-long by comparison. Most species of finches have distinctly notched tails; however, the Red Finch’s tail notch is relatively shallow.

Adult male Red Finches have a rosy red color on their upper breasts and around their faces, with a brown back, tail, and belly. During flight, you’ll also notice their red rump. Adult females are grayish-brown with blurry, thick streaks and a relatively indistinctly marked face.

Red Finches can look rather different from one another (especially males). However, their colorings come from their diet instead of regional differences. And even though all of North America’s Red Finches descend from the same few birds and are more closely related to each other than most species, there aren’t any significant differences between the two regions in terms of size, shape, and color.

Red Finches are a gregarious species; they collect at feeders and will perch high in any nearby trees. When the birds aren’t at a bird feeder, they’ll feed on weed stalks, the ground, or in the trees. Red Finches move quite slowly and will sit perfectly still as they shell seeds and crush them with rapid bites. Like many finches, their flights seem quite bouncy.

Where to Find Red Finches

You can find Red Finches by looking around habitats where people settle, like city parks, residential backyards, etc. They are social and gregarious; you’ll often see them in noisy, large groups that are difficult to miss. You’ll also want to watch around bird feeders and for Red Finches feeding on the ground or perching at the top of nearby trees.

You’ll find them across eastern and western North America and southern Canada all year long —they don’t typically migrate between seasons.

To attract Red Finches, you’ll want to fill your feeders with black oil sunflower seeds. However, once they discover your feeder, they might come back with a flock of 50+ Red Finches in tow!

Did you know these facts about Red Finches?