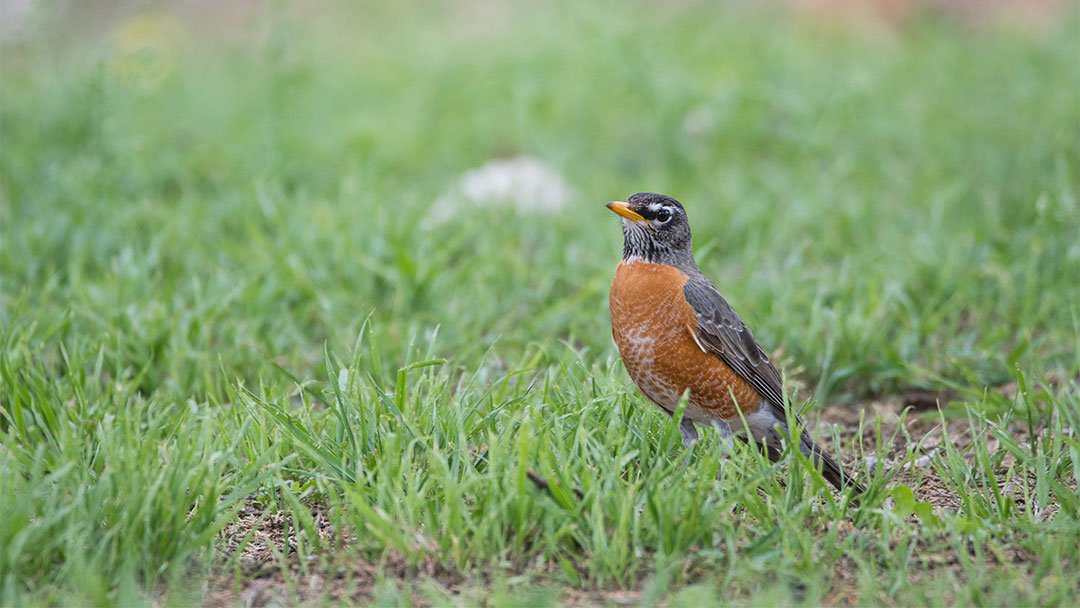 American Robins are the quintessential early birds commonly seen running through lawns all across North America. You’ve likely seen them in your yard before while they tug earthworms from the ground.

American Robins are popular among bird lovers for their cheery songs, warm orange breasts, and appearance right after winter ends. Although they’re familiar city and town birds, you can also find them in mountain forests, the Alaskan wilderness, and other similar areas.

Related: Learn About the Ruby-Crowned Kinglet

How to ID An American Robin

There are four keys to identifying an American Robin:

American Robins are relatively large for songbirds and have large, round bodies, long legs, and long tails. They’re the largest North American thrush with a profile that offers an excellent chance to learn about the basic thrush shape. American Robins also make a great reference point for comparing the shape and size of other birds.

American Robins have gray-brown coloring over most of their bodies with a darker head and warm orange underparts. When they’re in flight, you can see a small white patch underneath their tail and on their lower belly.

American Robins are an industrious species that you can commonly see bouncing across lawns or standing tall with their beak tilted upward, surveying their surroundings. When descending to settle on the ground or a branch, you’ll notice them flick their tail downwards multiple times.

In the fall and winter, you’ll see American Robins form large flocks and gather together in trees to snack on berries and roost.

American Robins are common across North America, and you’ll frequently find them in:

Related: Learn About the Red-Breasted Nuthatch

Where to Find American Robins

American Robins are everywhere! Look for them running across lawns or searching for earthworms in your backyard or a nearby park. They frequently sing their beautiful songs, and you can often find them by listening for their lilting, clear musical whistles.

In the winter, you probably won’t see them on your lawn anymore, but they might still be nearby. You can listen for their lower musical notes and look around for flocks around fruiting trees and in treetops.

To attract more American Robins to your yard, you can set up bird feeders with appropriate food or put up a nest structure to try to attract a breeding pair of the birds. However, if you do, ensure that you set it up well before breeding season.

American Robins are wonderful birds—did you know that:

‍American Robins eat different food throughout the day. They eat more worms in the mornings and switch to fruit later in the day. Because they forage mostly on lawns, they are vulnerable to pesticides, making these birds an indicator of chemical pollution.

Whether you’re an expert ornithologist or a hobby bird watcher, BirdBot can help you watch your favorite birds no matter where you are—Capture an American Robin today!

‍Related: Learn About the Black-Capped Chickadee