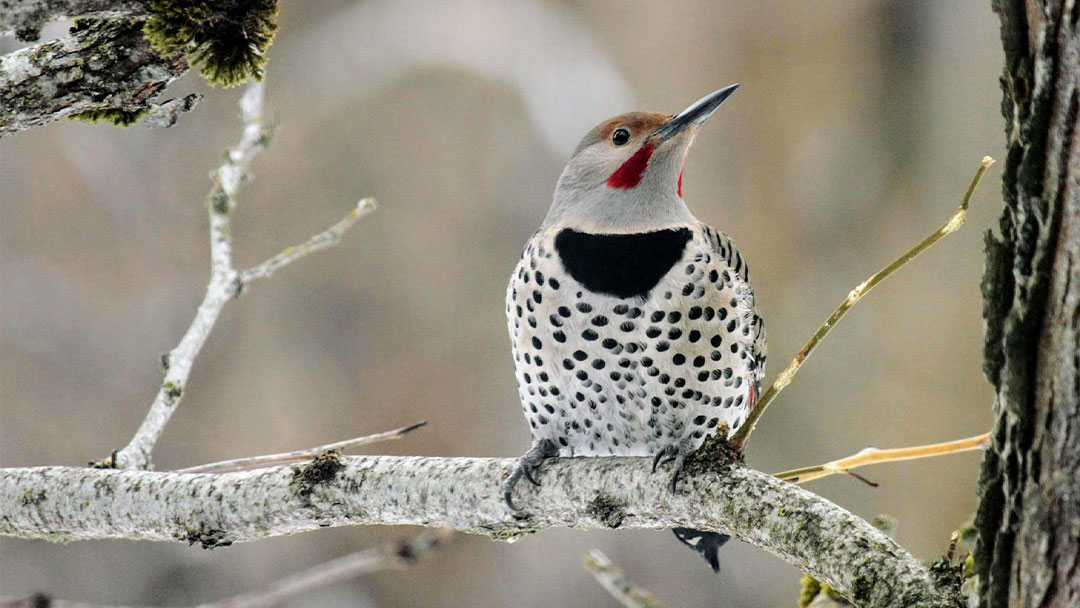 Commonly found across North America, the Northern Flicker is a large, brown woodpecker with black-scalloped plumage and a friendly, gentle expression. You might’ve seen them on the ground during a walk before they get scared and fly back up to the trees. While the ground isn’t where you would expect to find a woodpecker like the Northern Flicker, they primarily eat beetles and ants they dig out from the ground.

‍Related: Learn About the Red-Tailed Hawk

When they’re in flight, you’ll notice a flash of color in their wings — yellow in the east and red in the west — along with a bright white spot on their rump.

How to ID A Northern Flicker

There are four keys to identifying a Northern Flicker:

Northern flickers are fairly large woodpeckers and have slim rounded heads. They also have a slightly down-curved bill and a long, flared tail that comes to a point.

As a comparison, they’re about half the size of a Hairy Woodpecker.

Northern Flickers have an overall brownish color and a bright white rump patch that you’ll notice when it’s in flight and perched. On the underside of their wings and tail feathers, you’ll see bright yellow colors on eastern birds and red on western birds.

If you look closer, you’ll also see that their brown plumage is patterned with black bars, spots, and crescents.

Northern Flickers like to spend their time on the ground, but they will also perch upright in trees on horizontal branches. However, unlike many birds, they don’t lean against their tails on tree trunks.

They typically fly in an up and down path and use heavy flaps combined with glides, like most other species of woodpeckers.

You can look for Northern Flickers in any open habitat near trees, like backyards, parks, and woodlands. In the west, you’ll often find them in mountain forests up to the treeline.

To attract Northern Flickers, you can put up a nest box to attempt to attract a breeding pair — make sure to put it up before breeding season!

Related: Learn About the Ruby-Crowned Kinglet

In North America, there are two primary races of Northern Flickers.

The key difference is their flight-feather shaft colors, which are a bright yellow or rosy red.

Hybrids of the two are commonly found at the edge of their groups’ range.

Where to Find Northern Flickers

You can find Northern Flickers by walking around forest edges or open woods, but remember to watch the ground. The easiest way to spot them is to look for their obvious white rump patch during flight. You can also hear their piercing yelp and loud, ringing call. During the late summer, you’ll hear the yammering of hungry nestlings all around.

While they don’t habitually visit bird feeders, you can sometimes find them enjoying a birdbath or running through a backyard.

Northern Flickers are amazing birds — did you know that:

Northern Flickers are one of few species of woodpeckers in North America that migrate. While few remain north in the winter, most of these birds in the northern areas move south.

Related: Learn About the Black-Capped Chickadee

‍Are you just getting into bird watching or an aspiring ornithologist? Capture your favorite birds, like the Northern Flicker, with BirdBot!