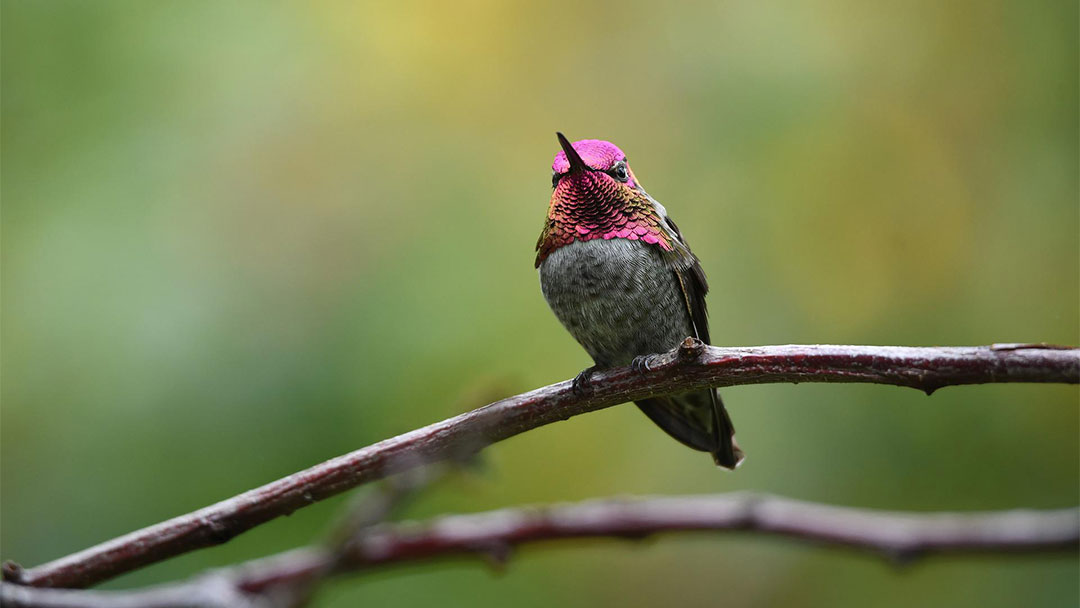 Small, fast, and graceful, the Ruby-throated Hummingbird is one of the only hummingbirds found in eastern North America. With a flash of red and green on the body, these tiny creatures are truly magical.

The best way to attract this bird is with flower gardens and hummingbird feeders. If you put enough of these in your outside area, you’ll have a lot of tiny, buzzing birds in the summer. However, by fall, they retreat to Central America, with most able to cross the entirety of the Gulf of Mexico in one flight.

Now that you have a general idea of what this bird is and where it lives let’s dive into the specifics.

Basic Information About the Ruby-Throated Hummingbird

Some of the specific features of the Ruby-throated Hummingbird can be found here.

The Ruby-throated hummingbird has a slender bill with a slight downward curve at the end. They also have short wings that don’t quite reach the tail when resting.

This bird has bright golden-green or emerald coloring on its crown and back with white and gray underparts. The males have a bright red throat that may appear dark in poor lighting.

The Ruby-throated hummingbird will fly straight and fast; however, they can stop on a dime, hover, and adjust their position going backward, down, or up with amazing control and grace.

You will see these tiny creatures visiting tube-shaped flowers and hummingbird feeders. They are also territorial and will defend a food source against others. They may also eat insects out of the air or spiderwebs.

Are you interested in learning more about birds and their impact on the environment? If so, check out our Bird Bot Camera.

Related: Do Birds Sleep? Here’s Where Birds Go at Night

Attracting Ruby-Throated Hummingbirds in Your Backyard

You can attract these tiny creatures to your backyard by planting tubular flowers or setting up hummingbird feeders. You can make your sugar-water mixture for these birds by mixing one-quarter cup of sugar for every cup of water. It’s best to avoid food coloring, and table sugar is the best option.

Be sure to change the feed before it gets too discolored or cloudy. Also, sugar water will ferment quickly during hotter weather and create toxic alcohol. Make sure you are careful about where you put the feeders.

Where Can You See a Ruby-Throated Hummingbird?

You can find the Ruby-throated hummingbird by flower gardens or at the edge of the woods in the summer months. If you have the right flowers or invest in a few feeders and a sugar-water mixture, you can see them in your backyard. They can be seen in towns and suburbs and may become bold when feeding near plants on your porch or windows.

Cool Facts About the Ruby-Throated Hummingbird

This is an interesting little bird. Some things you may not know about the Ruby-throated hummingbird include:

Are You Ready to See the Ruby-Throated Hummingbird?

The Ruby-throated hummingbird is one of the few species that you can see in the eastern portion of North America. Because of this, it is a popular species to look for on bird-watching expeditions.

With the information, you should know what to look for and where to see this small bird. Once you see one, you will want to watch them and see if you can attract them to your own backyard. You may even want to invite people over to watch with you.

Are you ready to learn more about birds based on scientific studies? If so, check out our wildlife surveys.