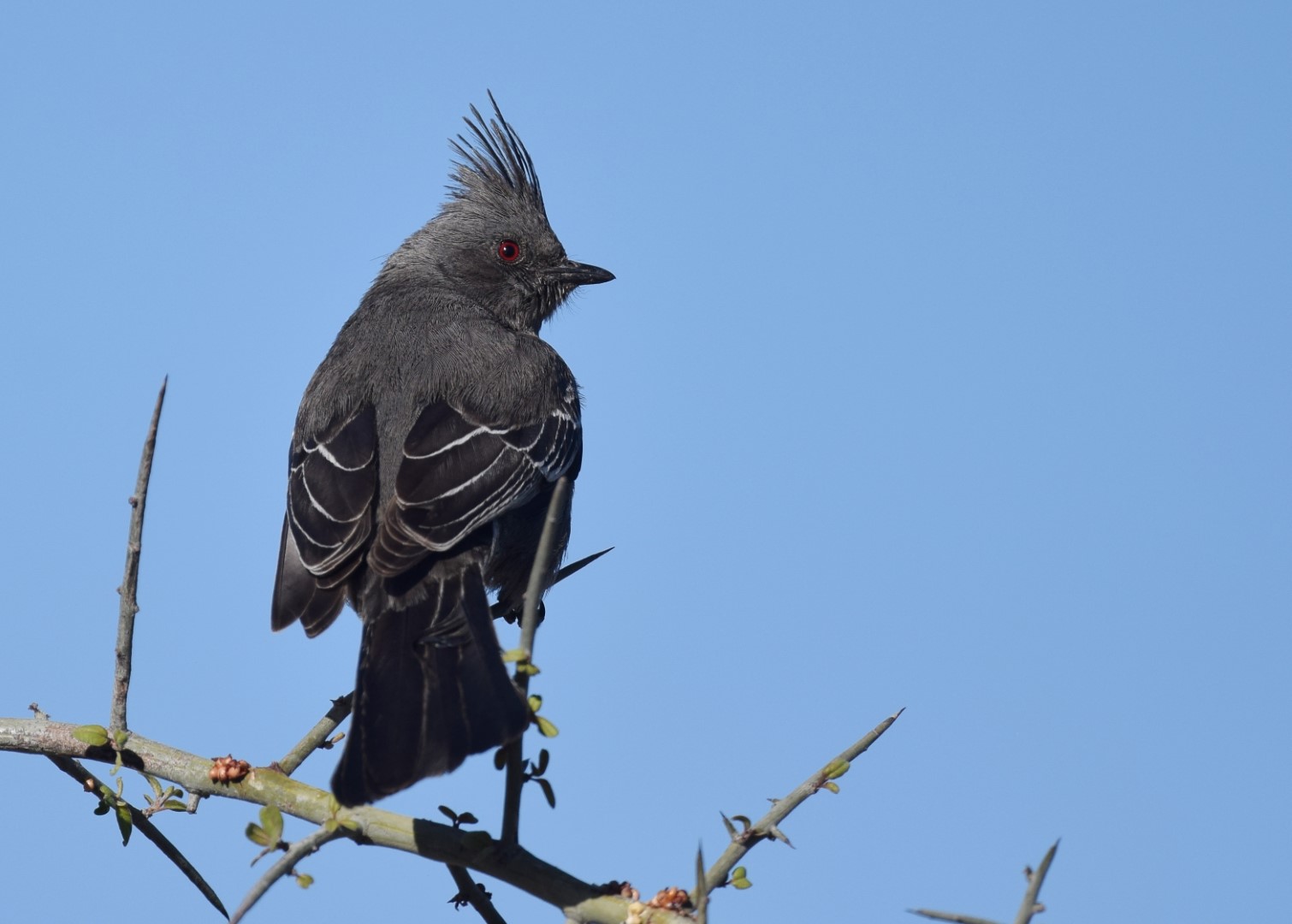 This little bird native to Mexico and the southwest of the United States is called a Phainopepla. It is a member of the silky flycatcher family and may be identified by its distinctive crest and iridescent coloring. It has a noticeable crest on its head, which it may raise or decrease according to its mood. The Phainopepla is a little animal with long, pointed wings and a thin body. Phainopepla's small, thin beak is perfect for capturing insects. Females resemble males but are a more muted gray. These shiny birds may be found in California and Arizona's oak and sycamore forests as well as desert washes where they feed mostly on mistletoe berries. They frequently hang high among plants and collect flying insects.

How to ID a Phainopepla

Here are a few key characteristics that can help you identify the Phainopepla by its wing span and weight:

Long, pointed wings and a long, pointed tail are features of the phainopepla. These characteristics are ideal for the bird's quick, acrobatic flight. When hunting, the Phainopepla can make quick twists and abrupt changes in direction and uses its wings and tail to catch insects in midair.

A beautiful bird. Black with a shiny blue or green shine covers the head and crest. While the wings and tail are black, the underparts are white. When the Phainopepla is flying, its unique white patch on the wings is evident. The Phainopepla's iridescent color is supposed to aid the bird in interspecies communication and may also serve as camouflage in its natural environment.

The Phainopepla is a solitary bird in its behavior. It typically forages alone and is rarely observed in huge flocks. When food is scarce during the winter, Phainopeplas will occasionally group up and forage together. Males and females will frequently coexist in these flocks and graze together.

The majority of the Phainopepla's food consists of insects because it is an insectivorous bird. In particular during the breeding season, it will eat fruit. The Phainopepla is a swift flier that catches insects in the air using its long wings and tail. Additionally, it will hang on a branch and wait for insects to pass just by its beak.

The Phainopepla can be found in a range of environments, including riparian zones, canyons, and forests. Although it can be found in some areas of California and Texas, it is more frequently seen in the southern United States and Mexico. Being a non-migratory bird, it will spend the entire year in its preferred habitat.

The Phainopepla will establish a territory and construct a nest during the breeding season. The nest is typically lined with feathers and is a cup-shaped construction consisting of twigs, grass, and other materials. The female Phainopepla will lay two to four eggs, and she will take care of their incubation for roughly two weeks. Once the eggs hatch, both the male and female will assist in feeding the baby birds.

In terms of migration patterns, the Phainopepla is a non-migratory bird. It will remain in its chosen habitat year-round, and does not undertake long-distance migrations like some other bird species. However, it may make short-distance movements in response to changes in food availability or weather conditions.

Video on the Phainopepla

In the video, a Phainopepla bird is perched on a branch in a wooded area. The bird is small, with a slender body and long, pointed wings and tail. The bird has a distinctive crest on its head, which it raises and lowers as it looks around. The head and crest of the bird are black, with a metallic blue or green sheen. The underparts of the bird are white, and the wings and tail are black. The Phainopepla has a distinctive white patch on the wings, which is visible when the bird spreads its wings.

The Phainopepla is seen turning its head from side to side, as if looking for insects. It hops along the branch, using its sharp beak to pick at the bark. The bird spreads its wings and takes flight, flapping its wings rapidly as it flies. The Phainopepla is agile in the air, and is able to make sharp turns and sudden changes in direction.

As the bird flies, its iridescent black and white coloring is visible. The bird's wings and tail are black, with a metallic sheen that catches the light. The white patch on the wings is also visible, and helps to identify the bird as a Phainopepla. The bird flies back to the branch and lands, folding its wings neatly against its body. It continues to hop along the branch, foraging for insects.

Did you know these fun facts about these little black birds?

Overall, the Phainopepla is a small but fascinating bird. It is a solitary forager that feeds on insects and fruit, and is found in a variety of habitats in the southwestern United States and Mexico. Its distinctive crest and iridescent coloring make it a favorite of birdwatchers, and it is a welcome addition to any backyard.