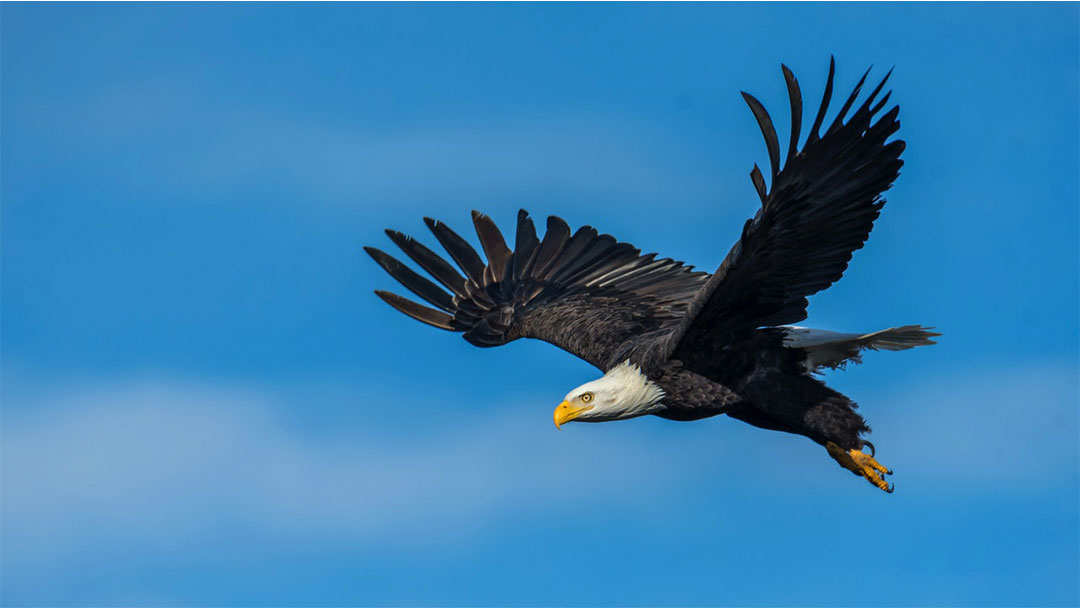 The Bald Eagle (Haliaeetus leucocephalus) has been the national bird of the United States since 1782. This sea eagle is the only eagle completely native to North America and has also been a spiritual symbol for native people groups. The bald eagle isn’t actually bald but has white-feathered heads contrasted by chocolate-brown wings and body, for that regal look we generally associate with the bald eagle.

Bald eagles are fish eaters, but they don’t always fish for themselves. They will often be seen soaring high in the sky in solitude or going after other birds to take the fish they have caught. They live in forests and have inaccessible nests in trees. At one time, bald eagles were endangered because of hunting and pesticides, but they are of low concern on conservation lists today. Protection has allowed these birds to, once again, flourish.

There are four main ways to identify the bald eagle.

The bald eagle is larger than most other birds of prey, with the second-longest wingspan. Its body is heavy, with a large head and iconic long, high-arched beak. The lower legs are bare, with the undersurfaces of the toes roughened for grabbing slippery fish. The female bald eagle is slightly larger with a longer wingspan than the male.

The length and breadth of the bald eagle’s wings indicate how they fly. They are capable of vigorous wing flapping when giving chase to other birds or food, but they are also soarers who can reach height and speed quite quickly.

The adult bald eagle has a white head and tails, and dark brown wings and body. They have distinct yellow bills and yellow legs and feet. For the first five years, younger bald eagles don’t have the contrast of colors they later achieve. They have primarily dark-colored heads and tails and brown bodies and wings. They have white feathers only in a few places.

Related:  Red-Tailed Hawk: The Most Misidentified Bird in North America

While bald eagles spend time in their nests or on the ground, you’re most likely to see them soaring high. You may be lucky enough to see one perched in a tree or flying just above the treetops. In addition to eating fish that they may or may not have harassed from another bird, they may also be seen eating garbage or carrion. Although bald eagles prefer fish, they will also eat waterfowl, gulls, and mammals.

It is this ability to live on a range of food choices that allows the bald eagle to thrive. They will also gorge when food is plentiful and slowly digest it over days. When food isn’t available, they can go without eating for days or even weeks at a time.

When on the hunt for food, bald eagles like to perch high near bodies of water where they can see fish swimming near the surface and wounded birds.

Bald eagles are found across the United States, Canada, and Northern Mexico. They live near rivers, lakes, marshes, reservoirs, and coasts. If you would like to see bald eagles assembling, you can find them in wildlife refuges, fish processing plants, dumpsters on the coast of Alaska and the Pacific Northwest, and near large bodies of water during the winter.

Bald eagles are monogamous, matching for life, and they use the same nest every year during the breeding season. Each year they add a little more nesting material and can reuse the same nest for up to 30 years. This is why bald eagle nests are the largest on record for any animal - not just birds.

In addition to the above, bald eagles may be identified by their talons. They have eight talons - four on each foot. The talons are grey in their youth and become black by the time they leave the nest. Digits I and II are considerably more significant than the other two talons on the bald eagle’s foot, being the two most used to grab and hold their prey.

Related: Do Birds Sleep? Here’s Where Birds Go At Night

‍Are you interested in birds? We believe that discovering, identifying, and learning about birds should be accessible to everyone. Check out BirdBot for more information.