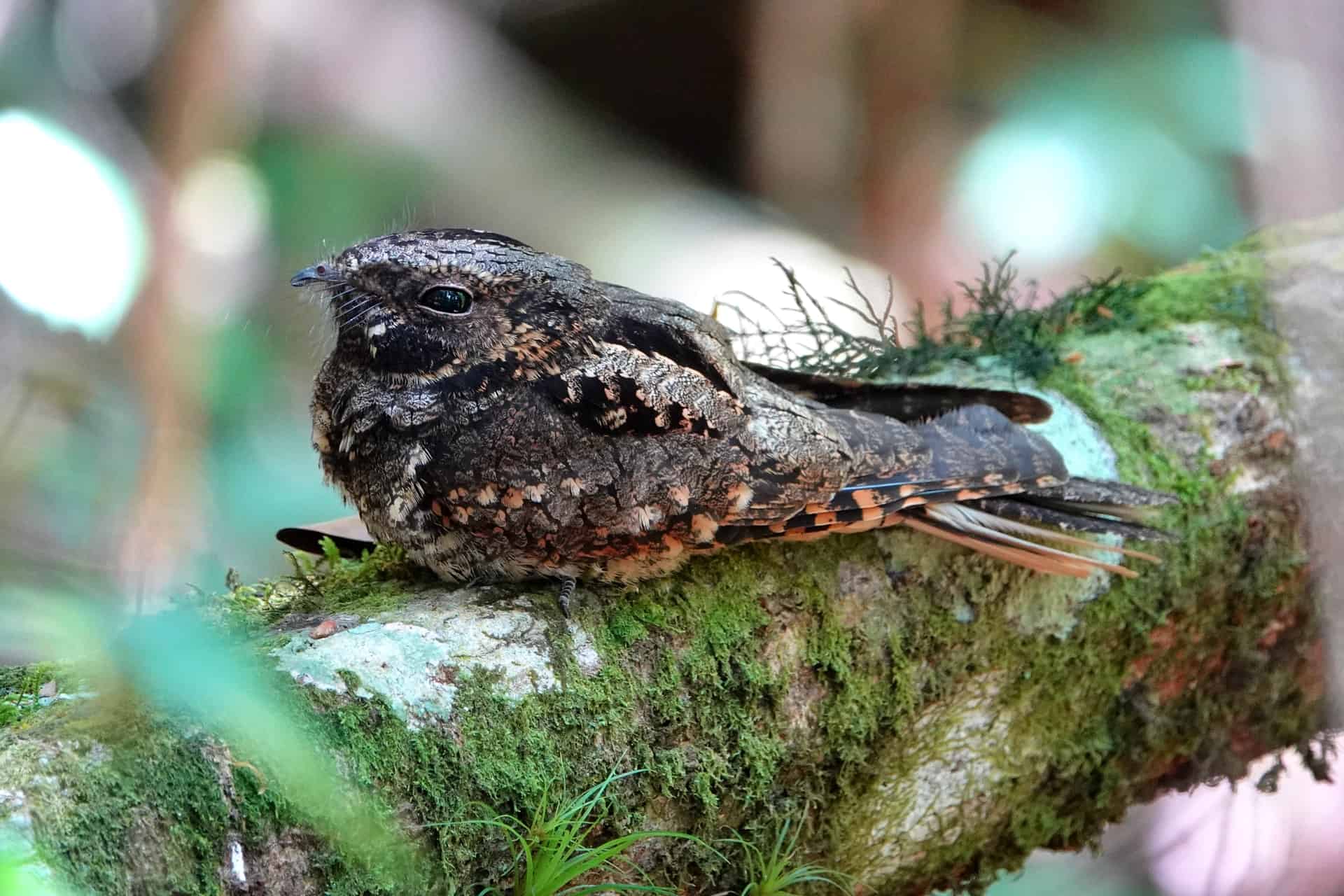 The Chuck-will's-widow is a member of the (folklore named) "goatsuckers" family of birds. The Caprimulgidae family name literally means "goat milker." It comes from an old idea that these birds milked goats with their large lips every night.

However, the presence of insects was most likely the reason for the birds' attraction to livestock. Rictal bristles are specialized feathers that assist in funneling insects into the bird's mouth, which is so big that it can swallow small birds and bats!

Chuck-will's-widow hunts for victims between dusk and dawn, gliding stealthily over the ground.

The "chuck" is North America's largest nightjar and is almost exclusively nocturnal.

The birds sleep along tree branches or on the ground during the day, where their mottled brown plumage blends in perfectly with dried leaves and tree bark.

Chuck-will's-widows are found in the Southeast and Mid-Atlantic regions where they breed in pine, oak-hickory, and other woodlands.

In the winter, they can be found in brush, woodlands, hedgerows, thickets, and fields all the way down to Colombia, Venezuela, and the Caribbean.

Unlike the Whip-poor-will, they like to reside in more open regions.

Love to see birds at their full splendor in their natural habitat or even in your backyard? Discover more about these distinctive species with the help of our new AI-powered camera designed for bird-lovers like you!

What Do They Eat?

They have occasionally been seen eating birds such as:

Do They Build Nests?

Chuck-will's-widows don't make nests; instead, they deposit their eggs among dead leaves, pine needles or bare dirt on the ground.

Typically, they use locations that are dense thickets near openings such as road edges or forest clearings.

Adults incubating eggs are extremely well disguised and almost unnoticeable unless you step on them.

The most noticeable habit of the Chuck-will's-widow is its nighttime calling, which is the most common encounter people have with these birds.

They feed primarily between dusk and dawn, though they may hunt throughout the night if visibility is adequate, such as during full moons or under streetlights.

They are vivacious and agile in flight, catching flying insects with a quick dive or chase followed by a bill snap

Territorial males can chase each other for up to a quarter mile while roaring.

Males call to the female while drooping their wings, spreading their tail feathers, ruffling their feathers, and puffing themselves up.

Pesticide use has an impact on Chuck-will's-widows since they eat a lot of insects. Also, when they land on roads at night to pick up grit, they are sometimes killed by cars.

Habitat destruction is a constant problem on both breeding and wintering sites. That's why it's important to learn how cities can better support birds to protect them.

This nightjar spends the winter in lowland forests in the Caribbean, Mexico, and Central America, where it lives alongside Wood Thrushes, Kentucky and Prothonotary warblers, and Painted Bunting.

Chuck-will's-widow has a massive flat head and long wings, despite its size.

It's much bigger than Whip-poor-will and Common Nighthawk.

You can distinguish a Chuck using the identification through observation process. Chucks are well-camouflaged thanks to their warm brown tones and elaborately patterned feathers.

If it flushes from a roost or passes across your headlights, you'll notice white inner webs on the outer tail feathers.

Their tail is less white than the Whip-poor-will's, which helps differentiate it from them.

Related: Jay Identification: Learn About The Types of Jays