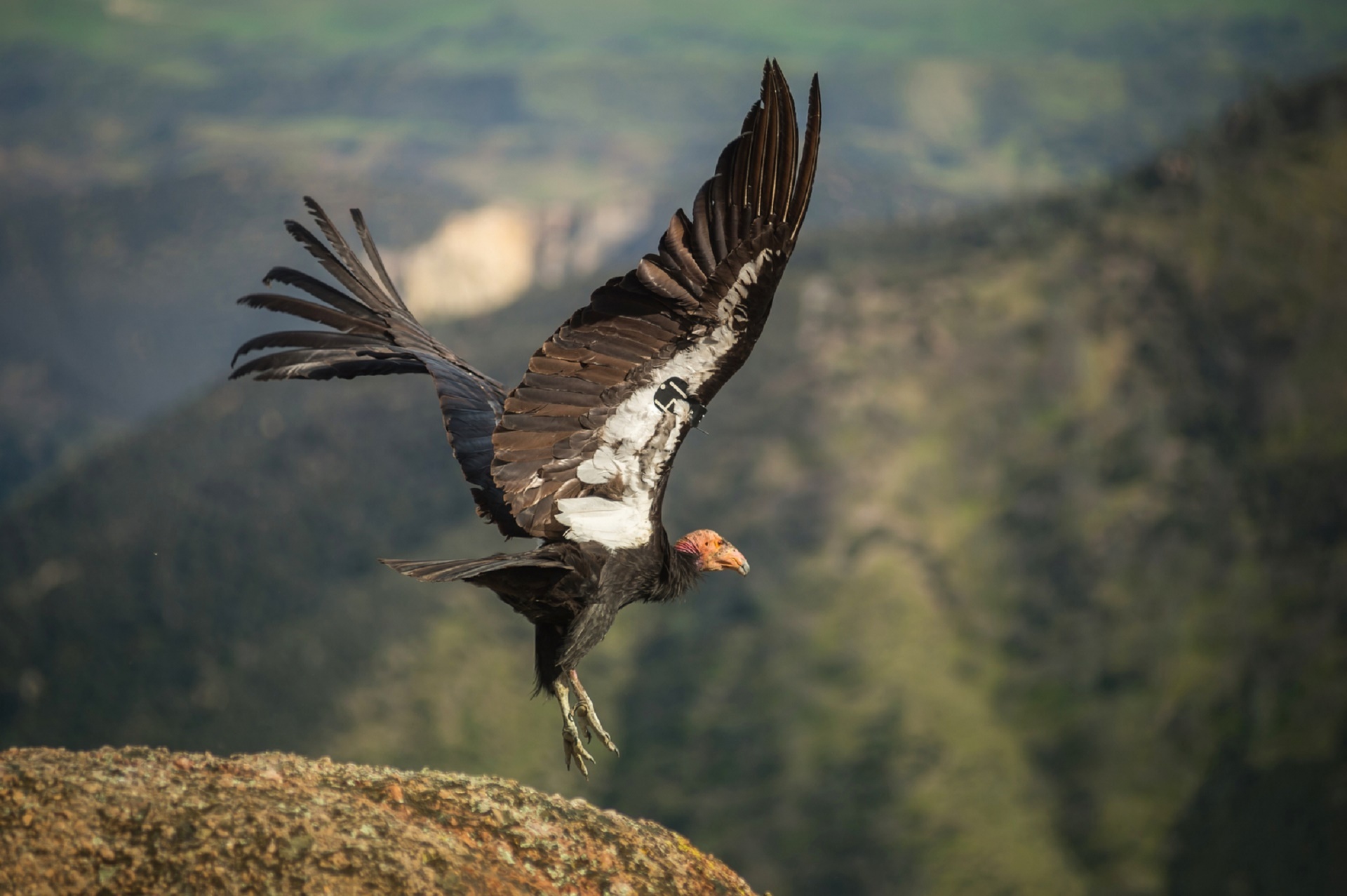 With a wingspan of about 10 feet, the California Condor is the biggest flying bird in North America. They may weigh up to 26 pounds, eat mostly carrion, and have a lifespan of up to 50 years. Beginning in the 1900s, habitat degradation, lead poisoning, DDT poisoning, and poaching all contributed to a sharp decline in the population of condors. There were just 9 of them remaining in the wild by the year 1985, therefore people had to remove them from their cliffside perches and confine them to zoos and research centers. The two reintroduction programs' ultimate goal is to have 150 birds in each range with at least 15 successful breeding pairs.

In search of food, California condors soar across a range of ecosystems. Condors are capable of reaching speeds of up to 55 mph. The Ventana Wilderness in Big Sur, Pinnacles National Monument (also in Big Sur), and Los Padres National Forest are the three launch sites in California for Vulture Rehabilitation. Contrary to the state of the location, North of the Grand Canyon in Arizona, at Vermilion Cliffs, lies the another ideal habitat for California Condors.

How to ID An California Condors

There are four keys to identifying California Condors:

With the exception of sizable triangular patches or bands of white on the underside of the wings, the adult California condor is entirely black. It features reddish red eyes, ivory-colored beak, frill of black feathers at base of neck, and gray legs and feet. The youngster has a blackish head coloring and is primarily mottled dark brown in hue. Instead of having white on the underside of its flying feathers, it has mottled gray.

The skin of the head and neck of the condor is capable of flushing dramatically in reaction to emotional condition, and this capacity may be used as a means of communication between people. The condor has few feathers on its head and neck. From yellowish to brilliant reddish-orange, the skin tone changes. The birds do not vocalize in a genuine syringeal manner. They can occasionally be heard hissing or groaning, but only up close.

While flying, the condor's keen eyes locate food. Due to their weight, they prefer high terrain where they may launch into free air right away because they find it difficult to take off from flat ground. They have been spotted at heights of up to 4572 m (15,000 ft), and their top speed is 88.5 km/h (55 mph). Condors are quite quiet. They are skilled at soaring and frequently fly at great altitudes while riding thermal currents, perhaps for amusement. However, air rushes through their spread, finger-like, main wing feathers when gliding and soaring, whistling shrilly in the process.

Their only vocalizations consists of wheezes, coughs that are suppressed, and grunts. Contrarily, condors are fairly meticulous. After feeding, they prefer to take a thorough bath in a pool before clearing their heads on grass, branches, or pebbles. Historically, animals that eat carrion have been stigmatized as filthy and disease-carrying, but this is far from true. After their bath, they spend several hours drying and preening their feathers.

In order to lower their body temperature, condors also engage in urohidrosis, or defecating on their legs. Within big condor groups, there is a well-established social structure, with rivalry to establish a pecking order determined by body language, competitive play behavior, and a range of hisses and grunts. When the birds eat, this social structure is very evident since the dominant birds consume before the juvenile ones.

California Condors may be found in a variety of habitats, from scrubby chaparral to wooded mountain ranges. Only a small portion of the California condor's distinctive range is inhabited. They may currently be found in Arizona, Utah, Baja California, Southern and Central California. From their breeding place, condors will forage in an area of 2,700 square miles. In the wild, California condors can live up to 60 years, and they can even live for more than 60 years in captivity. Carrion is eaten by California condors. They prefer carcasses that are tiny to medium-sized. They ingest bones and bone chips to fulfill their calcium requirements.

The Sisquoc Condor Sanctuary in the San Rafael Wilderness and the Sespe Condor Sanctuary in the Los Padres National Forest were designated as refuges because of their ideal condor breeding habitat. The Los Padres Condor Range and River Protection Act of 1992 added 34,200 hectares (84,400 acres) to the existing wilderness and designated 127,900 hectares (316,050 acres) of additional wilderness as condor habitat.

A look at the current efforts being undertaken by the Oregon Zoo—in conjunction with Zoo Partners—in the ongoing efforts at Condor recovery. A look at the ongoing challenges facing condors in the wild...and the steps that everyone can take to minimize the risks to wild condors.

Did you know these fun facts about the Condors?

Need to keep track of Condors in your area? Enter BirdBot — the most intelligent bird camera available. (Plus, you’ll be helping fund the future of ornithology!)