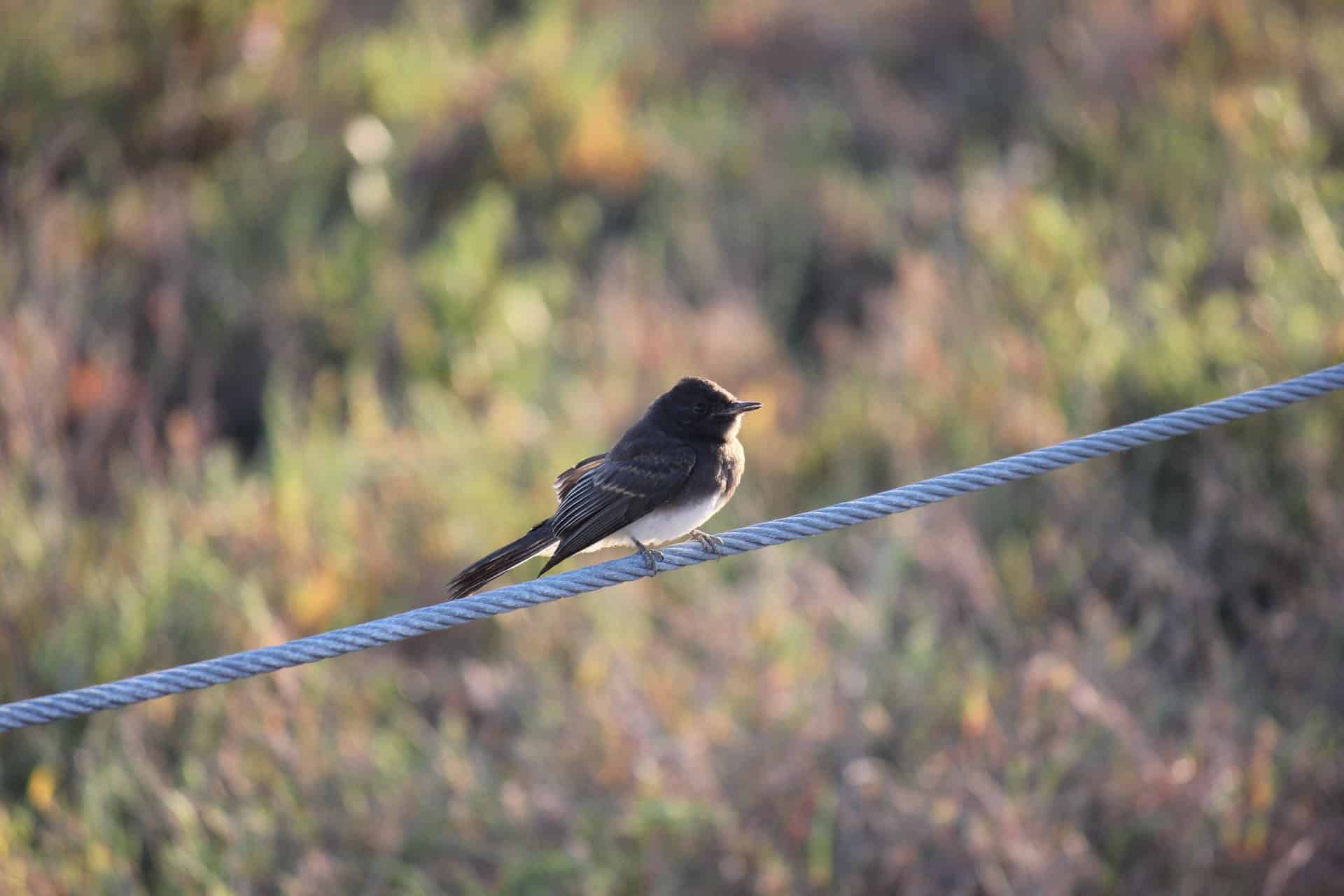 With a smokey black body and crisp white belly, the Black Phoebe (Sayornis nigricans) is an elegant flycatcher of the western United States.

They keep a running stream of harsh chirps while sitting in the open on low perches, scanning for insects.

These birds belong to the family of Tyrannidae from the order of Passeriformes.

Look for them near any water source, from little streams to slums and all the way to the Pacific Ocean's salt-sprayed rocks and cliffs.

How To Care For Them

They don't come to seed feeders (though they may come for mealworms), but they may visit your garden to catch insects or perhaps make nests under the eaves of a structure, especially if water or mud is nearby.

Black Phoebes get along well with people. You can make it easier for them to catch insects by placing some in places you've seen them visit.

How To Spot Black Phoebes

A good way to find Black Phoebes is through identification of behavior. The distinctive tail-pumping of the bird might help you identify it from afar.

A high, scratchy chip is frequently heard from Black Phoebes.

Black Phoebes are also common and noticeable near water sources and human constructions.

Scanning low branches, rocks, and shrubs along the edges of streams, lakes, estuaries, and the seaside is good because they prefer to stay low to the ground and perch in the open.

Ready to take your bird-watching experience to new heights? Sign up to our Kickstarter to learn more about our AI-powered camera specially made for bird watchers like you!

What Do They Eat?

Insects and other arthropods are nearly exclusively consumed by Black Phoebes.

The type of insects they eat include:

Black Phoebes perch within 7 feet of the ground or water, keeping a close eye on prey. When they see something, they sally from their perches to catch prey in the air, glean it as it crawls, or snare it off the pond's surface.

They may catch little minnows from close beneath the water's surface.

They eat little berries on rare occasions. They primarily feed during the day but will occasionally search for insects in the evening near street lamps.

How Do They Build Their Nests?

By hovering in front of potential nest locations for 5-10 seconds apiece, the male presents them to the female. The female is the one who makes the final decision about where to build her nest.

Year after year, they frequently return to the same location (or even the same nest).

Although Black Phoebes do not completely leave their breeding grounds in the winter, their numbers in the southern sections of their range increase, indicating that some individuals move southward.

For the breeding season, some Black Phoebes migrate up to higher elevations, then return downslope for the duration of the year.

According to National Geographic, the population of Black Phoebes is gradually increasing, with the range slowly spreading north.

Partners in Flight estimates that there are 6 million breeding pairs worldwide, with 18% spending part of the year in the United States and 50% in Mexico.

They have a Continental Concern Score of 9 out of 20 and are not on the 2014 State of the Birds Watch List.

Human development, such as buildings, culverts, and bridges, has increased appropriate nesting locations for Black Phoebes. For this reason, it's important to understand how cities can better support birds.

Because of their tight relationship with water, it's critical to safeguard water quality and wetland habitats.

BirdBot believes that everyone should be able to enjoy learning about birds and their habitats regardless of their age or experience. Check out our AI-powered camera designed for bird lovers like yourself!