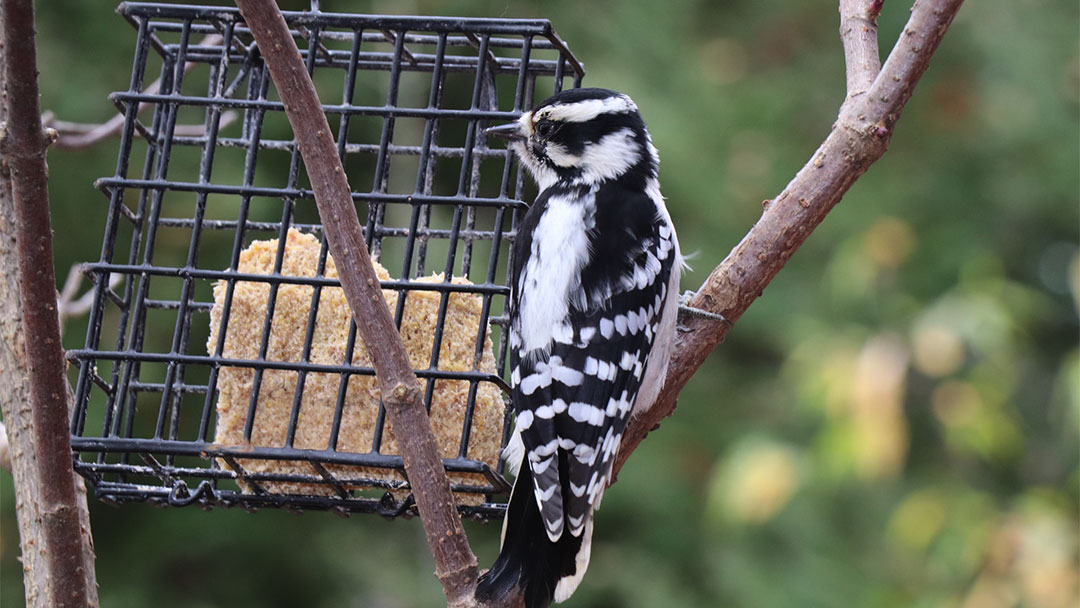 Downy Woodpeckers are relatively small and a familiar sight across North America at backyard feeders and in woodlots and parks. You can commonly find them joining a flock of nuthatches and chickadees where the Downy Woodpeckers slightly outsize them.

Related: Learn About the Black-Capped Chickadee

These black and white woodpeckers are known as acrobatic foragers, and they feel at home perched on tiny branches or balancing on suet feeders, slender plant galls, and sycamore seed balls. Along with their larger lookalikes (Hairy Woodpeckers), Downy Woodpeckers are one of the first ID challenges that beginner bird watchers look to master.

How to ID A Downy Woodpecker

There are four keys to identifying a Downy Woodpecker:

Downy Woodpeckers have the classic woodpecker body but are smaller — about ⅔ the size of Hairy Woodpeckers. They have chisel-like, straight bills, wide shoulders, and a blocky head. You'll notice their straight-backed posture when leaning away from tree limbs onto their tail feathers. Compared to other woodpeckers, their bills tend to be much smaller.

Downy Woodpeckers have a distinct black and white checkered body. Their head is boldly striped with black upper parts and white spots on their wings. On their backs, you'll often see a broad white stripe directly down their center.

Males have a small red patch located on the back of their heads with white outer tail feathers and a few black spots.

You're likely to see Downy Woodpeckers hitching around tree trunks and limbs or dropping into tall weeds to feed — because of their size, they move much more acrobatically than larger species of woodpeckers. However, you'll notice the same distinctive rising and falling flight style.

In the spring and summer, these woodpeckers make a lot of noise by drumming on trees and with their shrill, whinnying calls.

You can find Downy Woodpeckers in open woodlands, and they particularly enjoy deciduous trees and weedy or brushy edges. They also call many city parks, orchards, vacant lots, and backyards home. They are commonly found year-round throughout most of the US and Southern Canada.

They are also the woodpecker species most likely to visit a bird feeder in your backyard. While they prefer suet feeders, they also like millet, peanuts, and black oil sunflower seeds. Downy Woodpeckers will also occasionally drink from hummingbird and oriole feeders, too.

‍Related: Learn About the Ruby-Crowned Kinglet

Where to Find Downy Woodpeckers

You can look for Downy Woodpeckers in city parks, residential areas, and woodlots. You'll want to listen for their characteristic high-pitched note and descending whinny call. During flight, watch for small black and white birds with undulating flight paths. In the winter, it's not uncommon to see mixed-species flocks — don't overlook the Downy Woodpeckers among other chickadees and nuthatches. The woodpeckers aren't much bigger than those two birds.

Downy Woodpeckers are amazing birds — did you know that:

Unlike many birds, woodpeckers don't sing songs. Instead, they drum loudly against wood or metal to the same effect. Many people think that this drumming is part of their feeding habits, but it's not —when Downy Woodpeckers feed, they make surprisingly little noise even while digging vigorously into trees.

Related: Learn About the Red-Tailed Hawk

‍Whether you're an aspiring ornithologist or beginner bird watcher, you can capture your favorite birds, like the Downy Woodpecker, with BirdBot!