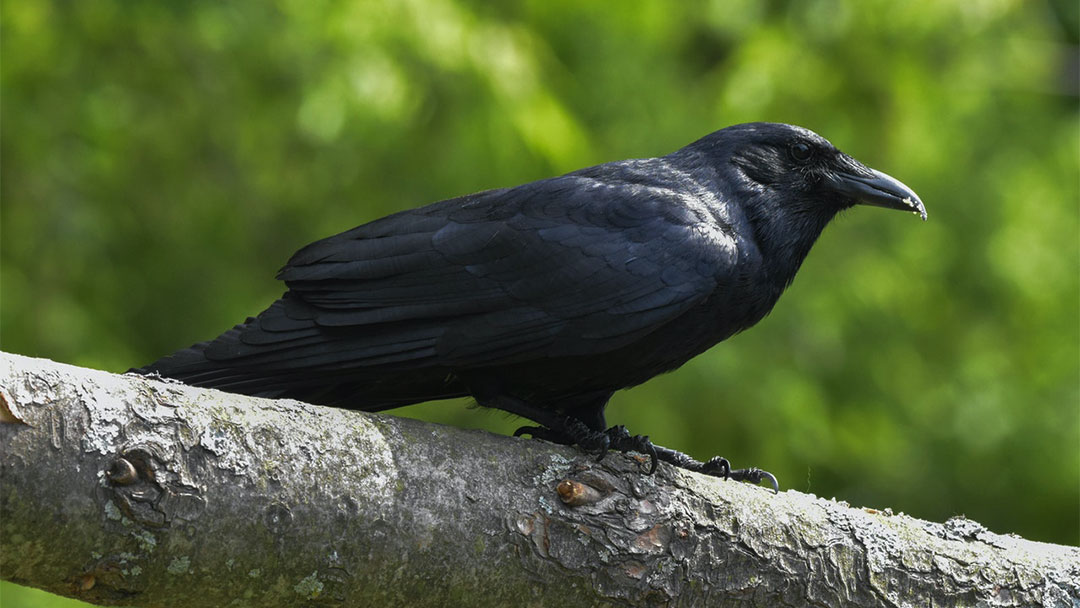 American crows are one of the most commonly seen birds in most parts of the United States and Canada. They can be observed in trees, open fields and woodlands, roadsides, and habitats in almost any location. Although there have been attempts to irradicate them, American crows have continued to thrive in cities, farmlands, and towns. They are among the most intelligent birds, partly seen in their ability to effectively adapt to civilization among humans for their own survival. They are large and completely black, with loud, cawing voices.

American crows are sociable and may be seen gathered together by the hundreds or even thousands in communal roosts on winter evenings.

They will eat almost anything, including insects, earthworms, seeds, fruit, small animals, and garbage. They will also feed on carrion and baby birds they take from other nests.

Here are a few ways to identify the American crow:

American crows are large, blackbirds with long, strong legs, a thick neck, and a straight, heavy bill with a slight hook at the end (also black). Their nostrils are covered by stiff bristles. They have a short tail that’s rounded or squared off at the end. The American crow’s feathers have a distinctive glossy, iridescent appearance.

Nearly 20% of male American crows are slightly bigger than the females.

Although they are confused with common ravens, the American crow is smaller than the raven. And their voices, though loud, aren’t as hoarse as the raven.

American crows are distinct because they are completely black, including their legs and bill. When they molt, the old feathers look brownish and scaly compared to their usual glossy appearance.

‍Related: Do Pigeons Leave The City? - A Short Story on Pigeons

American crows have a unique social system. They form flocks that may number in the thousands, and they’re cooperative breeders. They remain in the area where they were born to help take care of new offspring and defend their territory from predators. These protective birds can become aggressive to chase away bigger birds, which include owls, hawks, and herons. When they do this as a large group, it’s called mobbing.

American crows are known for their intelligence. They’re curious and sometimes mischievous, making them good learners and problem-solvers. They’re prone to eat discarded food in dumpsters and trash cans.

Some American crows migrate, while others don’t. Their social behavior includes the family groups, winter roosts, and floater flocks. During their breeding season, these floater flocks of up to 50 individuals may help care for the young, find mates, and seek out vacant territories. However, these are speculations as more research is needed on these floater flocks.

Yet another fascinating behavior of the American crow is called Anting. A crow will sit on an anthill allowing ants to crawl among its feathers. Sometimes they will even rub ants onto their feathers.

We know that American crows are very vocal birds, as everyone has heard their loud, coarse cawing. But they are also capable of making softer sounds and rattling. The cawing seems to be a distinct language and understood by fellow American crows.

The oldest recorded wild American crow was 14 years and 7 months.

American crows are commonly found in open woodlands, fields, and forests. They may also be seen living in more people-populated areas like sports fields, towns, backyards, farmland, parking lots, roadsides, towns, and city trash heaps. They prefer open areas near trees. These areas are full of opportunities to find food.

Do you love watching birds? We do too, and we think that learning about them is for everyone. Visit BirdBot to learn more.